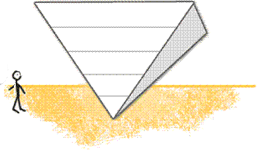 Organizing the way you write journalism articles is as important as organizing the way you tell any story. Readers won't tolerate a confusing story. They want a story that reads clearly and naturally.
Keep in mind that readers also have short attention spans. You need to hook them into your story from the beginning and hold their interest until the end, or else they'll stop reading. So, organizing your journalism stories in a chronological way (e.g. First this happened and then this happened...) seldom works well.
In journalistic writing, the first step to writing an organized story is to organize your interview and research notes so they make sense to you. Only then can you begin to organize the story so it makes sense to your readers.
As you prepare for this task, be on guard against a common blunder: organizing your story in the order in which you took your notes. It's very unlikely that you clearly and naturally organized the elements of your story during your newsgathering.

Getting Ready to Write

Good reporters write their stories as soon as possible after they've conducted their interviews. It's best to write while the information is still fresh in your mind. Before you sit down to write, follow these steps to organize your notes and thoughts.
1. Rewrite your interview and research notes so they're complete and make sense to you.
2. Categorize the info in your notes under each of the 5 W's and H or under other topic headings that emerge.
3. Prioritize. Which facts are most newsworthy? Which quotes are most interesting? Consider numbering your facts in order of importance and putting stars next to the best quotes.
4. Which quotes correspond to which facts? Match them up.
5. Write a statement of one or two sentences that explains your story. Imagine you're telling a friend about it. This statement will guide you as you write your lead and the rest of your story. Make sure your statement explains your angle.

The inverted pyramid is the most common way journalists organize their stories. But it's not always the best way.
Hard, breaking news stories (like the ones you'll be writing on your exams in this class) are usually best written in the inverted pyramid format.

In this format, the most important information comes first. In each successive paragraph, the information is a little less important.
"An example of a regular pyramid story might be an old-fashioned mystery where the reader is introduced to more and more important clues as he or she reads on," says Rich Cameron, a journalism professor at Cerritos College in California. "It is only after collecting all of those clues that the reader can finally begin to solve the mystery.
"With an inverted pyramid story we give away the solution (or in our case a summary) at the very beginning. The rest of the story contains less and less important information until we just stop," says Cameron.
Here's the inverted pyramid format in a nutshell:

Begin with the lead: a sentence, less than 30 words, that summarizes the most important information of the story. Imagine that you have only 20 seconds to tell someone what happened -- what would you say? That's your lead paragraph.

Next comes important but no absolutely necessary info.

Then, keep adding and organizing paragraphs in order of relevance and importance until the least relevant and least interesting info is at the bottom.
A close cousin of the inverted pyramid is the "Martini Glass" format. It works like this: You begin with an inverted pyramid summary of the story's most important facts. This is usually just a few short paragraphs. Once that's done, you shift into a chronological order of what happened. Then detail what happened step by step.

If possible, end with a kicker (a surprise twist or strong closing quote). This approach works well for crime stories.
But sometimes these aforementioned formats aren't the best way to tell your story. Imagine the story of Goldilocks in the inverted pyramid format: The three bears lived happily ever after once upon a time before Goldilocks ate all their porridge and broke Baby Bear's chair.
Consider other formats, such as the "Kabob" format.
In the Kabob format, the story begins with an anecdote about a specific person. Immediately after this, be sure to include a nut graph -- a paragraph that summarizes the story idea and the who, what, when, where, why and how.

After this, then story broadens into a general discussion of the topic. It ends by returning to that specific person again and concluding with another anecdote or quote.
"Think of it as arranging meat and veggies on a shish kabob skewer," explains Tim Harrower, a journalist at The (Portland) Oregonian. "Start with a juicy red tomato -- an anecdote. Follow with a nut graph. Then add meat -- chunk after chunk after chunk -- until you reach the end, where you reprise with another tomato -- a final quote or anecdote."
Beyond this, there are many other ways a story can be organized. There is no simple, one-size-fits-all solution for organizing stories. Every story unfolds in a different way. But there's nothing random about good writing. Every story needs a beginning, middle and end.

As you move from the beginning or your story to the end and from one paragraph to the next paragraph, be sure to include transitions. Transitions are words or phrases which keep the story flowing smoothly and let the reader know you are either talking about the same thing as before or you have changed subjects.

Journalism is not free-writing. Before you start typing up your story, sit down and jot down the highlights. Organize your ideas. Create an outline. If you get stuck, try carving your story up into broad sections, such as:
I. The Problem
II. What it means
III. What happens next

Impressive contents and information. It's really a great work for the author to share their useful thoughts and ideas to other. Keep up the good work.